Sarah sat down with us to answer questions about working on licensed comics, and what creators need to know when deciding to work on them. This is based on her over seven years of experience with licensed comics at three different companies.

Today, we will cover the editorial and publishing side of licensed comics. Tomorrow, we will discuss how creators can better understand negotiating licensed contracts and IP.

Creator Resource: Can you explain what licensed comics are, and how they work in terms of intellectual property (IP)?

Sarah Gaydos: Any time you work on a licensed product (example: Adventure Time Comics, where Adventure Time is owned by Cartoon Network, and Boom! is the licensor), everything you do becomes the property of the initial license-holder, across the board. The company that licenses the product owns nothing, but they get a percentage of sales after they pay 1) you, 2) all the associated printing fees, 3) the initial cost of the licensed deal to the IP owner, and 4) the royalties they will owe the IP owner. You doing a service like writing or drawing for this book gives you, and the comic company, zero ownership over it, because neither of you own anything to do with the ownership of the initial property.

This may also apply to things like, “Hey, I just drew an issue for DC.” You don’t own Batman, for example, so if that work is licensed out for a backpack, and you signed a work for hire contract, that’s the end of that. It obviously gets a lot muddier, when you’re working for a company that owns their own IP (like DC does Batman), but you should ALWAYS ask.

CR: What should creators know about licensed comics from the editorial perspective?

SG: You might read the above, and say, “Why on earth would anyone want to do that?”

The tradeoff is that you’re doing a commissioned, licensed, official piece of work for an IP that could be as huge as Star Wars. Comic, t-shirt, mug, novels, you name it—all of these types of companies partner (i.e. pay huge amounts of money) with huge IP holders to produce licensed products to tap into the already-established brand awareness of the properties.

Licensors want money, obviously, but they also want to expand the reach of their product through licensed merch. Theoretically, your work for hire rate should take this into consideration, but frequently it does not. Historically, work for hire rates are not as high as they should be, in part because the comic book publisher is taking on additional financial obligations with the up-front fees and royalties they must pay out to the IP holder first.

So again, why do it? I contend that doing licensed work for hire can be useful for the comic community in a few ways:

CR: The power dynamic between artist and publisher can be seen as unbalanced. How do you reassure artists that they can alter the terms of their contract? Nobody wants to seem like they’re hard to work with and walk away from paying work, especially if it’s a dream job.

SG: I think it all comes down to good communication. The publishers have pretty much no negotiating room in these types of deals. Generally, licensed merch deals are standardized in that “you pay the IP holder lots of money, plus royalties, to make a product with a IP that you do not own, and you do not own the IP you produce from it.”

Our chat with Sarah Gaydos continues tomorrow with a further discussion on licensed comics. You find Sarah on Twitter at @sarahgaydos. 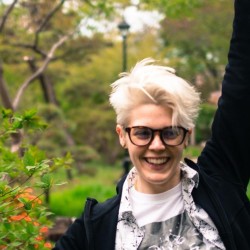 Beth Barnett
Beth Barnett is a cartoonist based in Cambridge, MA. She makes autobiographical comics about mental health, medicine, music, and relationships; and historical comics often with a medical or military bent. You can find her work at bethbarnett.co.

1 thought on “Licensed Comics 101 with Sarah Gaydos: The Publishing Side”