Fried Garlic Salmon with a Couscous and Feta Salad 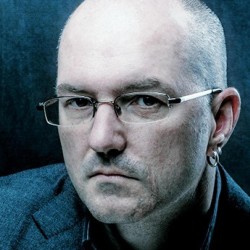 Antony Johnston
Antony Johnston is a New York Times bestselling graphic novelist, author, and games writer with more than fifty published titles, including THE COLDEST CITY, which became the hit movie ATOMIC BLONDE starring Charlize Theron. His epic series WASTELAND is one of only a handful of such longform achievements in comics, and his first video game, DEAD SPACE, redefined a genre. He lives and works in England.