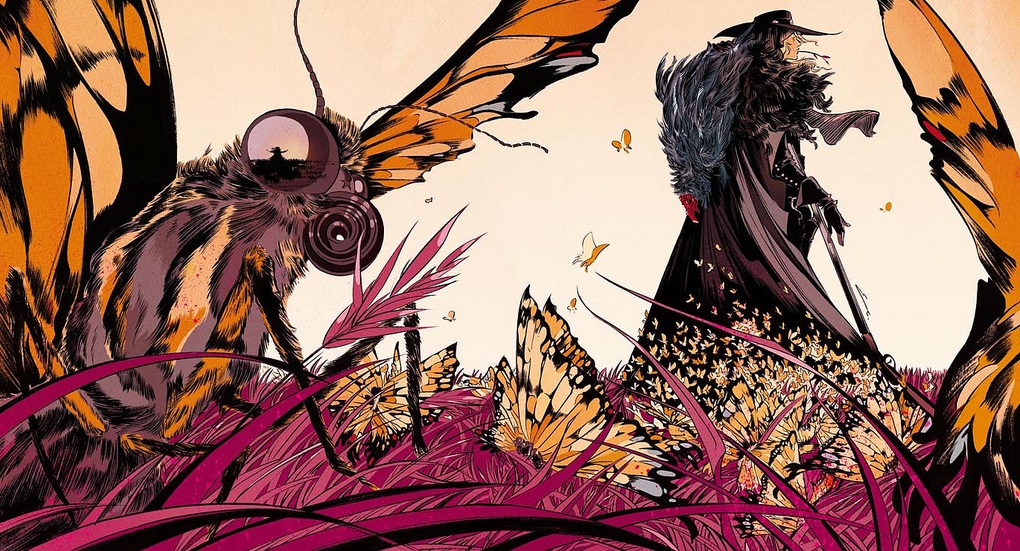 So, something you may not know about comics is that the person who does the art for the comic rarely colors their work. Often, this is because of the time restrictions involved in making issues of comics as regularly as creators do, but it also allows pencillers, inkers, flatters and colorists to focus and specialize on their craft.

In years past, much of the attention a comic got went to the writer. Sometimes, the artist would get accolades too, but rarely would anyone mention the colorist. But, with the advent of digital coloring, that’s beginning to change.

“Color is nearly insidious, manipulating a viewer or reader to feel and emote without consciously realizing it.”
– Jordie Bellaire, Colorist & Writer

The basics of coloring a comic are about what you would think: adding color to the inked, black-and-white line art of a comic book. Of course, any colorist worth their salt knows the job is much more than that.

After all, color (and the color palette chosen for a specific comic issue or title) gives us context and mood and tone, doesn’t it? Look below: how does your view of Da Vinci’s “Mona Lisa” compare to Behance.com user J Duran’s “Mona Lisa Frank (2011)”?

In an Image Comics spotlight of Jordie Bellaire (colorist for Moon Knight and myriad other titles) that you absolutely must read, Bellaire states that a psychology to color use is critical to a great colorist.

“The way one colorist may paint a depressing funeral scene is far different from how another might do the same. One may choose to paint the sky in reds, foreshadowing or signifying trauma. One may color it gray to give the impression of sadness or borderline emotionless, boundless feelings tied to death. One may leave things stark white to show the emptiness and meaninglessness of it all,” she states.

“It’s not just that a graveyard has green grass, that it is a sunny day, that the stones would be gray, that the flowers on the freshly dug grave are beautiful and bright—it’s much more than that, and many colorists know that. The real trick is to make sure your reader or viewer doesn’t stop to notice what makes your take so different. They just feel the things instead.”

What is the Process for Coloring?

Often, a colorist gets brought in toward the end of the creative process, after the script’s been written and the pencils have been inked. At this point, before they start the coloring process, some colorists may hire a flatter. Let’s pause for a sec and talk about that.

What Does A Flatter Do?

A flatter prepares the inked line art of a comic book for the colorist by filling each object on the page with solid colors, called “flats.” This helps the colorist not only see the difference between objects, characters, background and foreground, but also select each object in order to color, shade or render it. The flats chosen by the flatter don’t necessarily have to match or represent what they think the final colors might be, but it’s all right if they do, like in the image below (finished image on top, with the flats below, with line art removed – art by SpiderGuile with flats by jotazombie, both from DeviantArt.com).

Women Write About Comics did a really great deep dive into the work of a flatter. If you’re interested in learning more about what they do, definitely read their article. But suffice to say, flatters do a lot of work very quickly for relatively little pay, and they usually don’t get credited in the comic. Comics writer Christopher Sebela says it best:

OK, where were we…? Oh, right! The coloring process! So, after the flatter does their job, the colorist will go in and add the actual colors for the comic, as well as lighting, depth and shading (that the pencils and inks may not have done) and other effects to each page. They may also consult the comic’s artist or other creators for feedback on the colors in the planning stages, before color is applied to the page.

Their color use can reinforce the tone and emotion of the comic or the scene. They can show tension by becoming more saturated with color or by sucking color out. They can use color to bring more attention to a focal point on the panel or page, or to help guide the reader from panel to panel, keeping the momentum of the narrative. Often, too, colors are used for narrative purposes, where specific colors may reinforce which characters are good vs. which are bad, or locations that are safe vs. more dangerous ones, for example.

Here’s Matt Hollingsworth’s explanation of his coloring process for Hawkeye from the comic’s Hardcover edition:

Hollingsworth is an incredible colorist with over 20 years’ experience in the medium. He’ll often post pictures of his progress or process on Twitter (@MDHollingsworth). I’ll add some cool pics to the end of this article of how the above issue of Hawkeye is changed based on color palettes from various famous paintings.

What I’m trying to say is this: there’s so much thought put into color use in comics, and it’s so important to how we, the readers, interpret the book. We can’t dismiss it or forget all the work put in by each comic’s colorist. And even though colorists are beginning to see more credit for their work, the industry is a long way away from crediting them or paying them as well as the comic’s writer or artist. Which is unfair, since they obviously bring a lot to the comics reading experience.

See the Difference Coloring Can Make

In spring of 2018, to show their appreciation of colorists, Image Comics announced a black-and-white cover to Spawn #286 (artwork by Todd McFarlane), with 7 variants by bestselling colorists in the industry. Check them out!

VISIT COMIC BOOK YETI FOR THE SLIDESHOW EXPERIENCE OF THE DIFFERENT WAYS COLOURING CAN CHANGE AN IMAGE.

How does the mood of each change based on the colors used? Does one feel heavier, emotionally? Brighter? Sicker? Sadder? Does it even feel like the same comic?

Last, I just also wanted to show, below, an amazing Twitter thread of a response from Illustrator Jen Bartel to an aspiring colorist. It includes advice on how to elevate their skills as a colorist, helpful links, an infographic and a video for anyone who wants more information on coloring, color holds and some of the other coloring topics that I didn’t want to dive too deep into in this article. Go ahead and click to enlarge it and read more of her thread, if you’re interested.

Some of My Favorite Colorists

2 thoughts on “Colorists: What & Why”