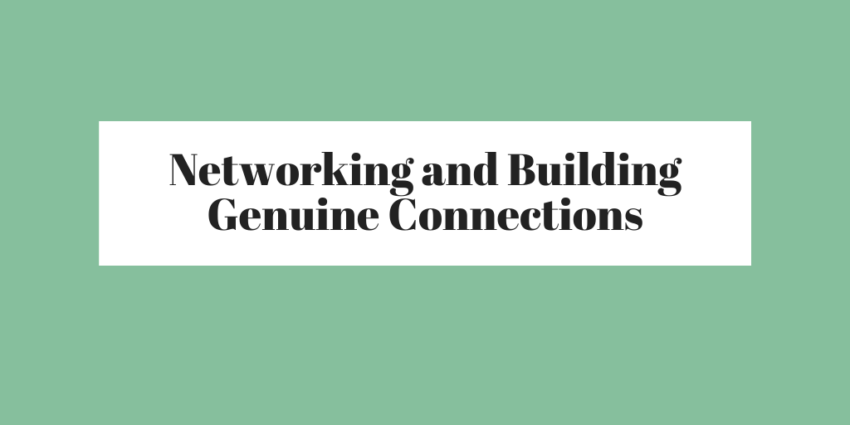 While the world is still pretty far from “normal” as the pandemic continues on, things are starting to happen again anyways. Amongst those things is a return to conventions, which has long been a place not only for showcasing your work but connecting with peers and networking with your community. As we make our way back to that life, I wanted to share some networking advice with you.

When networking with peers, many make the mistake of trying to connect with the biggest name in the room, so to speak. They think becoming friendly with them will be their golden ticket. It makes sense, in a way; if you can get in good with them, if they recommend you, it’ll mean that much more. But those people already have their network and while it can grow, they’re usually pretty set with their own group that they’re comfortable with and trust. The people that you should be connecting with are the ones at the same level as you. You need people to come up with who understand coming into the industry at the moment.

The people who’ve come to the industry before you had a completely different experience; all industries and how to break into them are constantly evolving. As much as I could give you advice on that and how I came into the industry (same with other established creators), that will change regularly and the people who understand where things are at as is (as I’ve said), are your peers at your level.

The network and support system you’re creating is about sharing information, helping each other out, critiquing groups, and more. You want them to become your circle that you can bounce ideas around with, talk to about what’s going on in the industry, help introduce each other to more of your peers as well as people with hiring power. And on a similar note, as you all find your way into the industry, hopefully also sharing the wealth.

And by “sharing the wealth” I don’t mean giving them your money. It means that if you have to pass on a job, you’re recommending someone else from that network and potentially helping them get hired. This happens all the time where schedules don’t align or you’re just not the right fit but chances are that you know someone from your network who would be a good fit or is actively looking for a project. You pass their name along and your peers are hopefully doing the same for you too.

At every networking event, there is always at least one up-and-coming creator who bails on their peers to star chase because they’re convinced that that’s their way into the industry. But finding the people who are just starting out and forming genuine connections is a million times more valuable to you as a creator. They can help you navigate the industry as it is and grow. And again, not to say that you can’t be friends with bigger name/established creators because you totally can. But the ones that are going to help you the most are the ones who are at the same level as you.

Treat your peers with respect. Understand that people can tell if you’re not genuine in your attempts to befriend them. And the sooner you learn that the industry is smaller than you think, the better. You might not think anything of it but if you’re the type of person to blow people off to hang with “bigger creators,” your peers will remember.

As you continue on in the industry, one of the most rewarding things about having a network is watching them find their success. Sure, it’s amazing to find your own version of success too, but seeing your peers succeed is inspiring and exciting. Every single time I see a friend announce a new project or get hired for something cool, I am so genuinely happy and excited for them. And eventually, seeing their work out in the world? THE BEST!!!!

That’s another reason why those networks and genuine connections are important. You shouldn’t want to compete with your peers but it’s okay to be inspired by them and strive for your own version of success. It’s about having a group of peers and friends that help you stay accountable to your goals and hold you to becoming the best version of yourself.