Rates are a nuanced process, and translation rates are no different. My personal recommendation, as a creator that has scripted and translated the same project in two different languages, is to not underestimate the time spent in doing justice to language. As translators, it is not just our job to make words understandable, but also to give them sense in a new context. For this reason, especially when working as a translator for other creators, I often work closely with them to give them as seamless a translation as possible.

Translation often brings a new layer to the rate setting process, as it might be important (depending on the project) to culturally contextualize the translation at hand. Now, I mostly work in English to Spanish/Spanish to English translations. Both require varying levels or contextualizing (or even decontextualizing) in order to adapt the work to the new language. This is an important part of the translation process, because language often carries a lot of significance in and of itself, let alone when it is being changed.

When it is time to consider numbers, I find the rates table from the Editorial Freelancers Association a great place to start. From there, I like to take into consideration what I mentioned above: Is this just a standard translation? Is there cultural context that I should consider? Something else to consider, is that often translation is easier to quote by the hour, as word by word can often be innacurate when translation from language to language. Finally, I want to point out the invaluable tool native speakers can present as language consultants, for projects that may not require a full translation but have characters that speak other languages. Translation and the skills that come with it are very versatile and play an important role in aiding proper representation in projects. 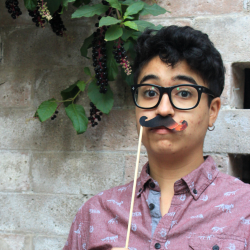 Barbara Perez
Barbara Perez Marquez is a writer, editor, and curator. She was born in the Dominican Republic and is now based in Baltimore, MD. Most recently, she was a collaborator for the graphic novel THE CARDBOARD KINGDOM. Her other works include: THE ORDER OF BELFRY, EN VOYAGE: AN ILLUSTRATED JOURNEY, and STAR WARS: THE FANS AWAKEN FANZINE. She has been part of several anthologies including: 1001 KNIGHTS, the BUFF BABE ZINE, and the WTF NOW? ZINE. You can find more of her work and ways to contact her at www.mustachebabs.com.