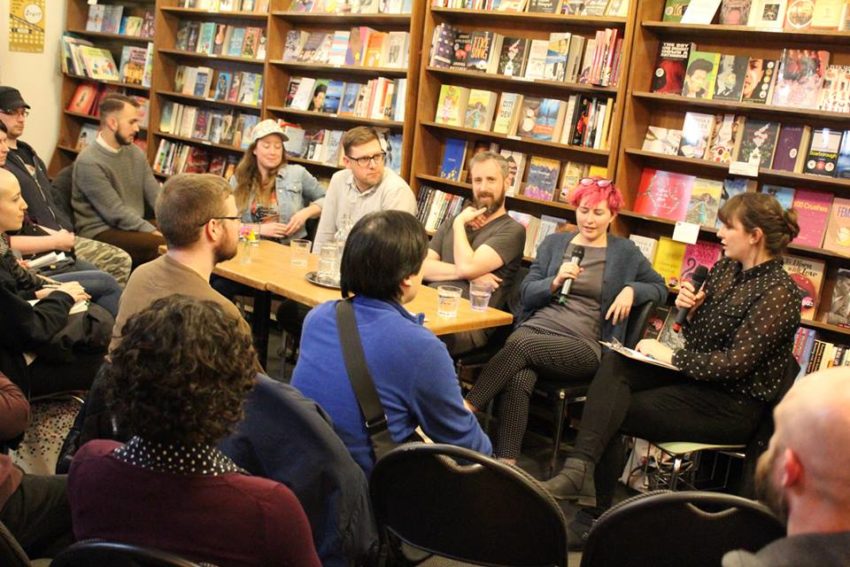 On March 26, Glad Day Bookshop in Toronto hosted us for a two-hour panel event and social. We recorded the audio from the first half of the panel for those who could not join us in person. Unfortunately, the second half didn’t come out in a good enough quality to use here, but we hope you’re able to utilize the first half of our conversation in growing and thriving within the comics industry. We hope it helps you better understand and guide you.

The panel was, as seen above, Comics 201 – Getting Started in Comics (Once You’ve Already Gotten Started): What’s next once you’ve already gotten the basics down and have started making funny books. Further discussion in refining your process, brand, pitches, and more.

Chip Zdarsky
Chip Zdarsky creates comic books and PERSONAL movies from his home in Toronto, Ontario. For almost 14 years he worked at the National Post newspaper as a columnist, illustrator and Spider-Man under the name Steve Murray. In 2013 he made the jump from the dying print industry to a different dying print industry as a comic-boy, co-creating the award-winning comic Sex Criminals with Matt Fraction. Since then he’s done work for Marvel, Image and Archie, but his true passion is writing bios for webpages.

Katie Shanahan
Katie Shanahan is a cartoonist and story artist based in Toronto, Canada. Collaborating frequently with her brother/writer Steven, Katie co-created the Joe Shuster Award nominated comic “Silly Kingdom”, illustrated a dozen short stories for published anthologies, and posts goofy auto-bio webcomics online every now and again. Katie’s worked for 14 years in the Canadian animation industry, and tries her best to maintain a happy balance between comics and cartoons.

As a quick note, the audio isn’t the best due to background noise and such (we’re learning on the fly for recording at panels!) but hopefully you’re still able to get some use out of it.

1 thought on “Audio: Comics 201 – Getting Started in Comics (Once You’ve Already Gotten Started)”