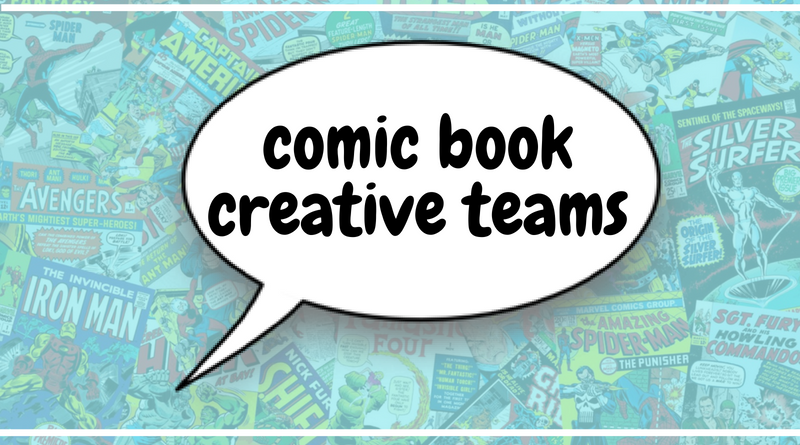 This week’s piece is all about understanding who does what in a comic book. There are numerouspeople involved in making a comic book happen so we’ll going to list out some of the major ones for you.

Typically in the credits of a book, especially superhero comics, you’ll see a number of creators listed. You may see titles such as:

Script by:
Story by:
Art by:
Pencils:
Inks:
Letters:

In today’s piece, we’ll be discussing some of the roles and what it means when you see these things listed in the credits of a comic book. Let’s jump right into things!

The writer is responsible for the script that the artist (penciller, inker, colourist, letterer, etc.) will work off of. This includes panel descriptions, number of panels per page, the dialogue, captions, sound effects (aka SFX), and any other notes that will help the artist effectively bring the story to life.

In many cases, the writer is building the world for the artist too and providing feedback to bring their vision to the page. A good writer, however, knows how to communicate with their artist and how much feedback to provide to them in order to effectively create the structure of the world. Communication is key, and a writer needs to ensure they’re not being overbearing to allow for the artist to retain creative control and enjoy the process.

If there is only one artist credited on a comic book, there’s a good chance that they did the pencils, inks, colours, letters (the definitions of all of those can be found below) etc. Typically in the credits of a book, especially superhero comics, you’ll see a number of creators credited.

The penciller is the person who lays down the drawings that will be the backbone for the inker. The penciller interprets the script and makes sure that the images on the page represent what’s happening in the story. In some cases, the pencils and inks may be done by the same person, but regardless, the pencils tend to be a looser version of the final product.

The inker uses strong lines and shading to emphasize the work already on the page from the pencils. The inker adds in any additional details needed to tell the story as per the script.

The letterer is responsible for incorporating all the dialogue, captions, and sound effects onto the page. They work off of the script that’s provided and use a specific set of comic book lettering rules to ensure that the page is easy to read and understand.

The colourist does exactly what you might think: they colour the comics. A colourist is absolutely vital to the comic book. The comics medium has grown a lot over the years and now the colours on a comic can make or break how the book looks. They help set the tone, vibe, and just make the comic look a million times better.

I reached out to some friends to help me describe what exactly a flatter does and my pal, Richard Pace, described it like this: “If the colourist is a house painter, the flatter is the assistant who preps all the surfaces and tapes off the edges to make the job go faster.”Essentially the flatter puts down simple colours and prepares everything for the colourist to step in and focus on the shading, accents, and other things that will come into effect for the final colours.

The editor is responsible for a lot in the book. In addition to normal things like checking for any spelling/grammar errors, the editor is also responsible for tracking continuity, checking over the pencils, inks, colours, and letters, getting the book off to the printers, following up with publishers for vouchers (if working as a freelance editor), and keeping a schedule for the entire team.

This is pretty straightforward and doesn’t just apply to comic books. A publisher is the company that has chosen to take on a particular comic book and distribute it under their brand. Marvel and DC are the “Big Two” with the largest market share and then other publishers include Image Comics, Dark Horse, Boom!, Valiant, Oni Press, and more.

Sometimes you’ll see this listed in a book, especially indie titles. Created by refers to the person who initially came up with the original story, and characters. Unless the person is both an artist and a writer, usually there should be at least two names for this: the writer who came up with the story and the artist that came up with the character designs and concept art.

While a writer may have gotten the ball rolling on a pitch or story idea, comic books are a visual medium, and artists should always be credited as a co-creator. The artist is building the world that the readers will be absorbing as they go through the book and in this medium, that is extremely important.

As a series continues, you may see that the writer and/or artist is different from the CREATORS. Oftentimes, a creative team might decide to move on from a series to work on other projects, so they’ll hand their book off to someone else to take over. The new creative team will be credited appropriately, but CREATED BY along with the original creators names should always be something that you see accompanying everyone else in the credits.

SCRIPT BY or STORY BY

It had some additional variations but I’m mentioning this there is an important distinction to be noted here. The artist is very much responsible for how a story looks on the page (duh) and they’re communicating with the writer to ensure that what’s in the script is getting translated properly into images that convey the story.

The artist is as much of a storyteller as the writer is, when it comes to comic books.

Samnee being credited (in this example) is a great way of acknowledging the work that an artist puts into making the story an actual story. Without the art, these would just be screenplays, and people would likely just read novels instead.

I loved this so much and I wanted to address it in case you ever came across something like it in a book. It’s extremely respectful and in a book where you might not get a “creator” credit (Marvel and DC own their own characters), it’s maybe the next best thing to acknowledge the collaborative process between a writer and artist.

**There’s a chance I might be mixing up the exact way that Samnee/Waid are credited in Black Widow but I do distinctly remember that Waid gave Samnee a credit as a storyteller within the series either by saying “Story by” or “Written by” and crediting them both. Regardless, I’ve seen it in Black Widow and a couple other books (with different creators) over the years.

As with all our How To Get Into Comics pieces, these articles are “live” so if you see anything missing, I’m always happy to fix things up and add in new content to make it easier for folks to understand comic books. You can reach out to me directly at info@creatorresource.com.

If you have a story about how one of our columns helped you or a friend get into comics, we want to hear about that too! Email us or leave a comment below to share.

2 thoughts on “Comic Book Creative Teams: Who’s Who And What Do They Do?”