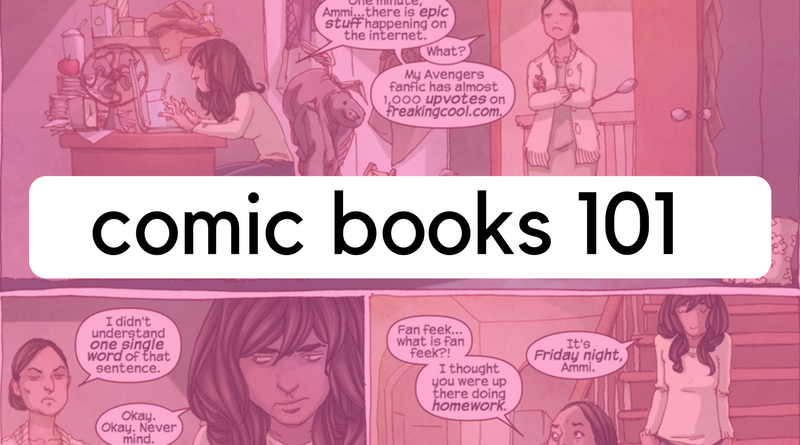 As mentioned in my introduction post, How To Get Into Comics is an ongoing column that’s dedicated to helping new readers come to the medium. There’s a lot of stuff to go through so I’ll do my best to be thorough and as comprehensive as possible (without treading into overwhelming territory).

Before I dive in, just know that you can ask me anything either in the comments or via social media as well, especially if you feel something needs clarification. OR you can email info@creatorresource.com to chat further.

For clarification, I’m going to use the American comics method here. Manga is another thing entirely and we can certainly cover that in another post but this post will be for getting into comics like Batman, Saga, X-Men, etc.

HOW TO READ A COMIC PAGE

This seems like a good, logical place to start! When you open up a comic book page, you’ll see a bunch of panels (the individual boxes containing different bits of art that tell the story). Within those panels, there are caption boxes (usually in the top left hand corner of a panel) and word balloons near the character speaking.

The Word Balloon represents dialogue. It will almost always have a directional arrow that points towards the character speaking so that there is minimal confusion.

The way to read the page is to go from Left to Right, Top to Bottom.

With the panel shown on the right hand side from Saga, you would look at the two tops panels (from left to right), move down to the third panel and read the balloons “Are you…” followed by “I’m.” and then “I’m alive.”

You’d then move down to the next panel with Alana (the female character in the middle) kneeling and read “We’re alive.” and then “Stupid.”

I think word balloons like the one in the middle of the panels can sometimes be tricky, but you’d read the “Ahh!” and then end this page with “Show yourself!”

Sometimes it’s trial and error a bit with bigger, more elaborate pages and panels, but the art should always be guiding your eye to where you’ll be going next. And again, the rule of thumb is Left to Right, Top to Bottom.

If you’re reading your comics digitally via an app like ComiXology, a great feature that they have is called Guided View. This allows you to double tap (or click) on a panel to move in on it and naturally guide you to where to start. When you swipe to move on, it will guide you to the next panel that you should be going to.

This makes it so easy for new comics readers to get their bearings. You can double click again at any time to zoom back out and look at the full page. This will also help you understand how the Guided View worked and hopefully will teach you to be able to read the comic organically if you’re using a digital platform.

Of course, there’s no harm using Guided View even when you know how to read comics! It’s sometimes just far easier to take in all the details of a panel this way when you’re reading digitally.

Traditionally, single issue comics come out once a month, and are about 22-pages long. There are longer single issues but you’ll see them sometimes referred to as an Oversized Issue.

The best way that I can describe a single issue is that it’s like an episode in a season of your favourite TV show. You get a piece of the story each month that tells a larger over-arcing storyline (aka an Arc). A story arc can be anywhere from 4-6 issues. It can be part of a continuing story (called an Ongoing Series) or simply be a one-off story arc (which is a Mini-Series or Limited Series).

You typically can get single issues from your local comic book store. They tend to have the most selection when it comes to the comics that are available and are more likely to have something that you’re curious about in stock. We’ll talk more about comic book stores in another column.

Trade paperbacks (often referred to as TPBs) are usually a collection of a complete story arc for a particular comic book series. If we continue with the comparison to TV, this would be the complete season.

TPBs are great! They’re one of the more accessible ways to read comics since a huge variety of places carry them. You can pick up collected trades via Amazon, in your local bookstore, or borrow them from your local library. If you read your comics digitally, Amazon’s Kindle Store often has Marvel trades on for incredibly low prices, starting at around $5, which is significantly cheaper than anywhere else… unless you’re getting them from the library which obviously lets you borrow books for the low price of FREE.

If you’re picking up an ongoing series or a series that has already released trades before, make sure you’re looking at the spine to see what volume number you’re picking up. You’ll ideally want to start at Vol. 1 unless you’ve done your research on a particular series and know of an alternate jumping on point. We’ll cover more of this in later columns.

One other great perk about collecting or reading comics in trade is that there are sometimes little bonuses for readers. Content can include bonus essays, script to final product type demonstrations, and cool concept art.

OGN stands for Original Graphic Novel. These are trade-like comic books that are standalone. They’re not part of an ongoing series and if you hear someone saying “Check out this OGN!” it usually means that it is completely readable by anyone.

Marvel and DC release a few of these a year and they allow for a fan (or newcomer) to check out a character or team in a way that’s not too bogged down by previous continuity.

A lot of the “smaller publishers” release these regularly though. They don’t have other comics or characters that you need to know.

There are many different OGNs that cover every single genre. There’s absolutely one out there for you!

That’s going to do it for this first column on where to start. I hope it helps in some small way and that you’re able to dive into comics a little easier with these tidbits on hand.

If you have any questions, comments, or anything you’d like to add to this (including clarifications), don’t hesitate to reach out. And if you use any of these tips to get into comics, let me know! I’d love to hear about your experiences: stephanie@roguesportal.com.