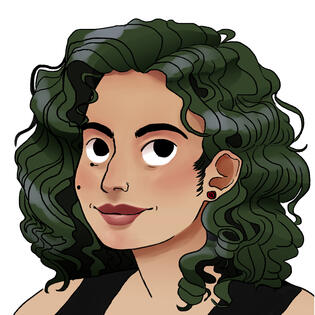 Hi Joamette, can you start by telling us a little bit about your start in cartooning, editing, and lettering?

Sure thing! I first started drawing seriously when I was 12, after deciding that cartoons were the best because they gave me Sailor Moon! I ultimately switched lanes from wanting to animate to wanting to make comics because I learned that animation is a huge pipeline where everyone involved doesn’t necessarily get a say in the story. With comics, I could express myself fully while still getting to connect with others through drawing. Lettering became one of my specialties almost by accident–it was the type of work I got offered most while trying to make ends meet, and I happened to fall in love with it and get really good. Editing didn’t enter my life until early 2016, out of necessity again, because I’d have to edit if I was going to start a publishing company!

P&M Press happened when I got way too sick and tired of low pay and a way-too-white industry. The founding goal was to pay marginalized creators to create the sort of work that’s sorely missing, and to pay them at least double the industry standard per page for a micro-publisher. Honestly, I just held on to the sinking, sad feeling I would feel whenever I got my (small) paycheck for a freelance thing I’d worked really hard on, and I decided I wanted to create the opposite experience for people if I could. It sounds depressing when I put it like that, but I think of it as an optimistic “yes, I can do something about this,” haha.

Most of your work in comics revolves around Latinx and Queer identity. For a lot minority creators living in the United States in 2019 (myself included), it’s almost impossible to create anything that doesn’t speak to our identity and it’s place in American society. Is that true for you as well, and has that changed since the 2016 election?

Yes, it’s very true for me, but I think it’s always been true, regardless of the year or which presidency we were under. The 2016 election didn’t change much for me creatively, in that sense. The U.S. has never valued us (Latinx nor queer) as people with equal dignity. My upbringing was one where sharing your feelings or feeling depressed was silenced, and comics has given me the power to… desahogarme. For folks who don’t speak Spanish, that word means to “get something off your chest,” but broken down into its roots, it means to “un-drown myself.” It’s the only word that really captures what my comics work does for me.

Power & Magic Press has focused heavily on anthologies that bring together a large amount of incredible creators. What’s the secret to juggling that many creators, deadlines, and eventual kickstarters? Is there a secret, or is it as chaotic as it sounds?

It’s as chaotic as it sounds, haha!! No secrets, just dedication, organization, patience, empathy, and self-care. Also, especially with the Kickstarter and what comes after, asking for help. I used to be full-time freelance, and the anthologies were a bit easier to manage than they are now that I have a day job, too. They’re still happening, though!! P&M Press is my baby.

What does the future look like for Power & Magic Press?

It’s looking real good! Our latest book, HEARTWOOD: Non-binary Tales of Sylvan Fantasy has continued to be a massive seller well past the campaign, and we’ll be adding three more books to the catalog between now and Fall 2020 (that includes MAÑANA: Latinx Comics From The 25th Century). I have at least five other concepts in the chamber, just waiting for the right announcement time. Our ultimate goal is to build our distribution channels out enough to offer solo creators a good deal to sign with us.

The last question we’re asking everyone is this – if you could go back to and speak to a younger Joamette, or any other aspiring Latinx editor, what’s one piece of advice you’d give them to make the journey easier?

Oh boy. My most honest answer is “skip college,” but I know that’s biased. So many of my goals have been held back by being in debt for my education. I guess the other advise I would give is to remind yourself you’re not in this alone. There’s friends and family and peers, but also: you’re not the only one trying to accomplish something that feels insurmountable. Fight for yourself, but fight for others, too. Seek community, and be the type of person others would want to be in community with. We all get where we’re going thanks to someone having our back along the way.