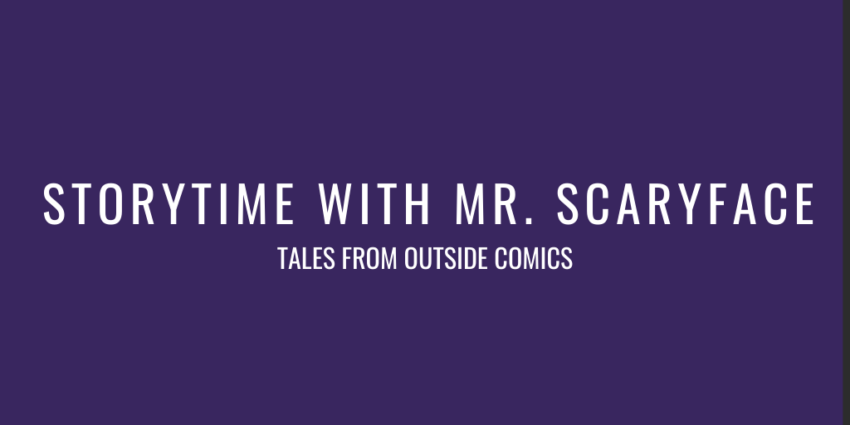 Hello, and welcome back to Tales from Outside Comics, the motivational advice column written by someone trying to break into the industry in real time! For this entry, we’re going with a little bit of Story Time, so please, bear with me.

Back in my freshman year of high school, I distinctly remember the feeling of being called upon by some teacher who absolutely knew I hadn’t been paying attention. It sucked – definitely the stuff of nightmares. In particular, there was one teacher whose name I just can’t remember (it’s probably best to give him a pseudonym anyways) so let’s just call him Mr. Scaryface.

Now, to put things in perspective, Mr. Scaryface taught 14-year-olds world history as if he’d prefer to be speaking to adults. So, being a young person who hadn’t finished socialization yet, much less been able to perceive the very concept of History, it was a pretty tough class. What made it even tougher was Mr. Scaryface’s favorite game.

You see, he would assign reading, and then assume everyone would come into class the next day with fully developed understanding of what they’d just read (from the barren wastes of context that is a middle-America public school textbook). I don’t know about you, but when I was 14, I was much more preoccupied by my burgeoning musical tastes than trying to figure out how the world came to be.

But I’m losing the thread – this guy, this fucking sadist, he knew that we knew nothing. When he asked the class a question that, to him, was so rhetorically redundant that you could hear the echoing boredom in his voice, and yet, when nobody raised their hands (because, duh, what is life at 14) what do you think he did?

Call on some oblivious dimwit (aka me) because of course he did.

And the first time, it was quite embarrassing.

But, after that first time, something just clicked inside, and I took dramatic action.

I started to raise my hand – it didn’t matter whether I knew the answer to the question or not, that wasn’t important. The important part was, and I’ve known this about myself for a very long time, but I decided that if anyone was going to embarrass me, it sure as hell was going to be me.

Did I know the difference between a baroque and a rococo painting? Absolutely not, but at least I knew I had no idea. Soon enough, Mr. Scaryface knew it too, and he stopped calling on me. But there I was, hand in the air 45 minutes straight, declaring in front of everyone that I was willing to jump on that grenade of embarrassment.

Before long, the guy sitting next to me figured out what I was doing, so he just joined right in (he definitely took some shrapnel before realizing what was going on). And then his friend joined, and his friend after that. All it took was one declaration of ignorance to get four hands in the air, day in and day out, suffering through Mr. Scaryface’s class one day at a time.

(It’s about this point that we hit the sickeningly sweet moral center of our story, so I’ll keep it short. It doesn’t matter if you know the answer, sometimes it’s more important just to raise your hand and find out you were never truly alone.)