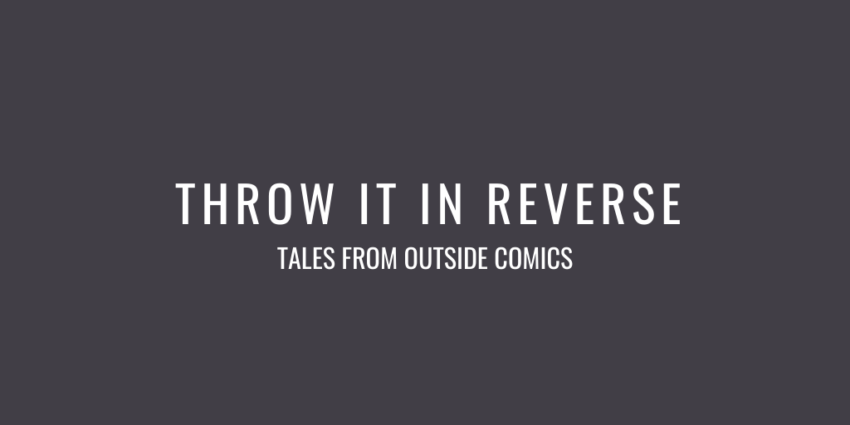 Hello, and welcome back to Tales from Outside Comics, the motivational advice column written by someone trying to break into comics in real time! This week, I might have finally lost the last bits of sanity I’d been clinging to, but you tell me!

This week’s entry comes with a warning: all of this might be gibbering nonsense, and should potentially be treated as such. Maybe it’s a terminal point of Pandemic Boredom, or maybe I’ve gone too far down a rabbit hole of weirdness… either way, proceed with caution, and prepare your Fiction Suits.

So I think I’ve mentioned it here before, but I’m a huge fan of Grant Morrison. They were the reason I’m so obsessed with comics; reading DC One Million when I was eight-years-old, it was akin to a cosmic awakening. Superheroes were Real, and they would protect me forever, into the 853rd Century and beyond. That was when I realized I wanted to be a writer – the only person I told was the aunt who had brought me those single issues. The seed was planted as a deep-set forward motion time machine, ready to sprout across lifetimes.

It was in college, when I was so lonely and angry, that I found Animal Man and Doom Patrol, Seaguy and WE3, The Filth and The Invisibles, All-Star Superman and Seven Soldiers of Victory. They didn’t speak to me so much as shine directly into my soul, banishing the darkness for however briefly the pages stayed open. When one of my professors lamented Hunter S. Thompson’s suicide, I tried to comfort her by saying he lives on in Story, larger than the shell of life we’re all stuck in.

The first peak of my obsession was in Senior Year, when I flew out to Vegas for a weekend, just for Morrisoncon. It was one of those beautiful moments in life when you find your tribe; I felt completely at peace with myself for the first time in so long, a second childhood of sorts. And I still cried myself to sleep every night, knowing how alone I’d be back home, when the dream was finally dead. I had to leave before it was over, the constraints of flying on Earth, but I had a chance to turn back, to return to dreamland. The flight was overbooked, and one person had a chance to face the Desert Night once again. I’m sure there’s some other universe where I had that courage, to walk penniless back into paradise. But instead I took that plane back to Normal, and lived my way to Now.

I’ll spare you that long, dark night of the soul, before I finally found The Moon, and felt that Glow of Goddess once again. (You never really know why you’re running until you’re caught.) Morrison was the one who gave me the courage to talk to Superman, to believe in Magic and Chaos and Trust that everything was going to be OK. If I had cursed myself with Loneliness, it was only in effort to find my Truth, to turn the pen towards my own Story – those wild beasts, the Comics!
When I return to their work with Eyes of Childhood, I can feel that cosmic pull once again. The great unknown tugging at my shirtsleeve, whispering in my ear… Try something Crazy and it just might Work. THE DOOR HAS ONE SIDE AND OPENS BOTH WAYS – like a Cosmic Radio Message in a Bottle, it washes on the shores of Thought and Memory, a glittering Spiral jewel holding the Secret Ocean up to your Third Eye.

I’ve tried reading my comics backwards lately, following the letterer’s trail, just in Reverse. And the scariest part is that they still make sense in their own broken way. It’s just the sense I make of them, at least. That contemptable three act structure, turned the other way, it’s still a Chaos sandwich, no matter which way you look. Happy Endings set the stage while Status Quo’s pull up anchor – the rest is up to you, to figure out what happens and fit together the Puzzle that is Comics.

It’s not a perfect science, but it sure is one hell of a ride – to take apart your favorite works and see what you can do with the pieces. You can become the co-writer of your new favorite story. Because it’s truly up to the Reader to bring the story to Life – you’re the one who follows the words, who turns the page, who finds the treasure at the end of the map.

You get to decide where it all goes.

That’s it for this week folks! Hope everyone out there has been staying saner than I clearly have! And if you’re someone who enjoys Creator Resource, keep an eye out for a virtual panel featuring Stephanie, myself, Nashville native Matthew Southworth, and my friend and collaborator Louis Moon – I’ve managed to bring talking about comics to my day-job at Nashville Public Library, and it will be a sight to behold! We’ll be talking about “The Power of Myths and Stories in Childhood,” blurring the lines between influences and self-prophesizing. Wherever the conversation takes us, I’m sure it’ll be somewhere interesting!