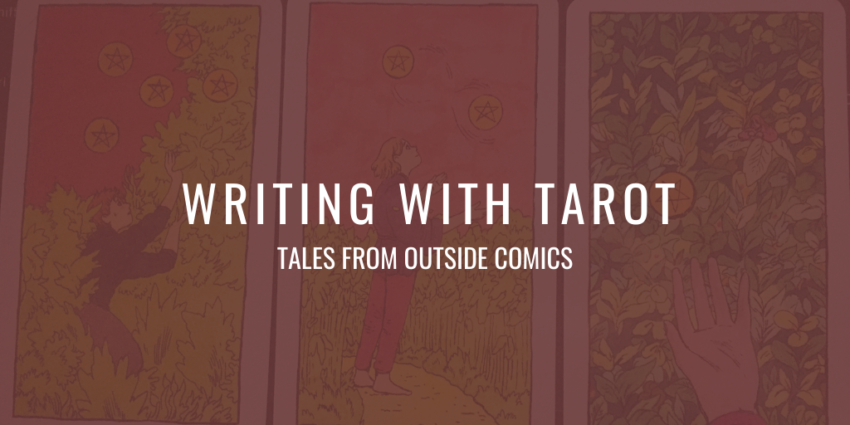 I shuffle in silence, trying my best to empty a cluttered mind. Draw three cards: Five of Pentacles, Two of Pentacles, Ace of Pentacles. “You’re struggling with balance – start small, focusing on what you can do, take what’s in your power, in your hand, and get to work. 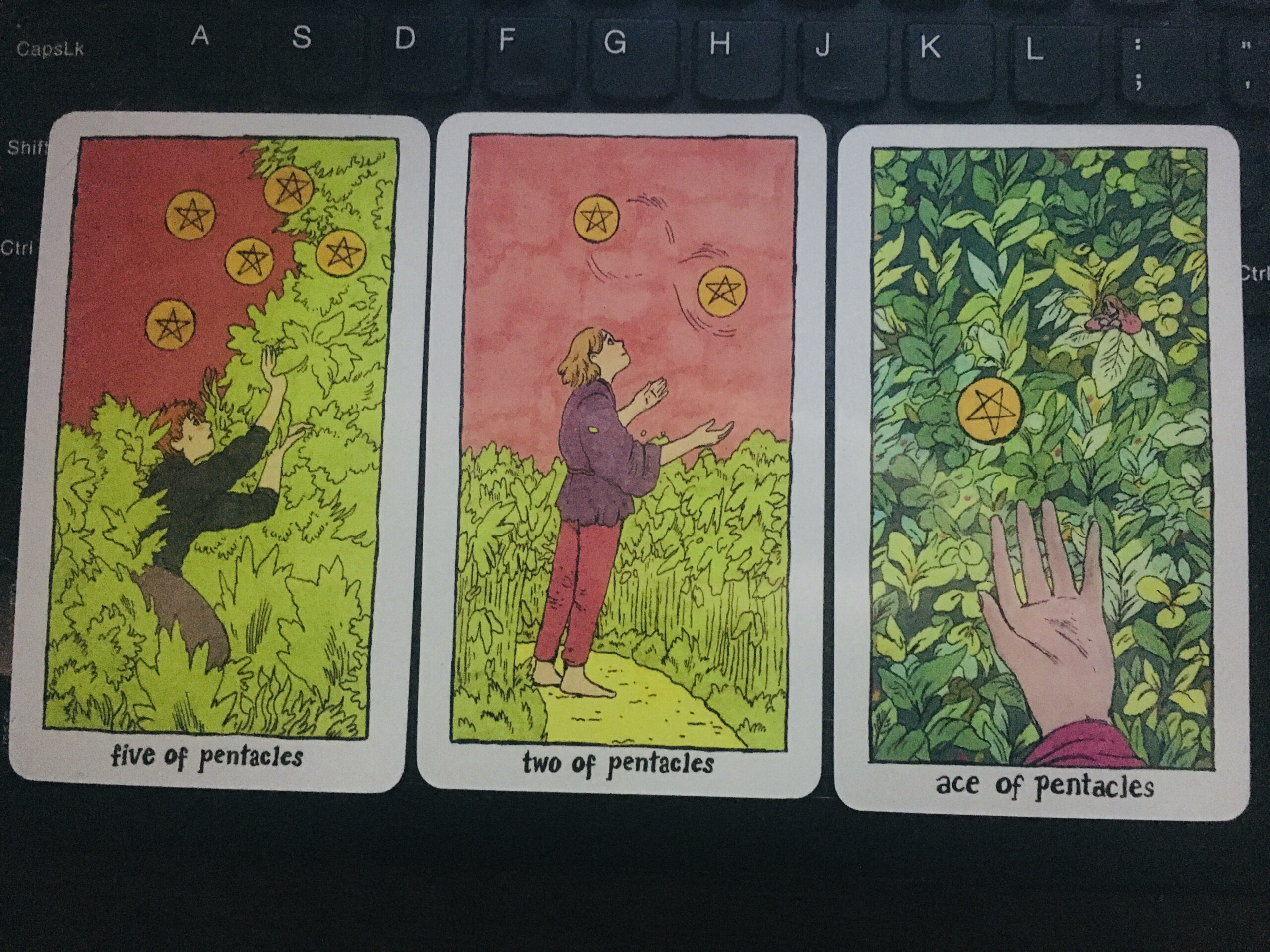 Tarot is a wonderful tool, useful for more than simply scrying your crush’s heart, and working with it has expanded my creativity immensely. Putting together random pieces, finding the symbolic links, deriving meaning from a combination of history and imagery; every reading is a story in itself.

There are plenty of guides out there for getting started with Tarot, deriving and dissecting the recurring, traditional symbols within. For today, I’m going to assume you’ve read at least one of those other guides, and are familiar with the basic terminology, and hopefully you already have your first deck to use. What I’m interested in are the ways you can use a Tarot deck to help you when working on a project, how it can become a creative partner and tool.

That was the initial reason I started reading Tarot for myself, to help me with my writing – the book that encouraged this was The Creative Tarot by Jessa Crispin, and I would definitely recommend checking your local library for a copy (if not buying it outright). The most helpful spread in that book, at least for me, was the Unblocking spread.

It uses seven cards in total – lay out the first two side by side, then cards three and four above one another, forming a “wall,” followed by three more cards after that, depicting your path ahead. The placements are read as such: 1) Is you 2) is your project 3&4) are your obstacles 5) is your secret weapon 6) is your next step and 7) is the outcome/future. (Future used loosely here, of course. Take from it what you will.)

Another technique I’ve used Tarot for is fleshing out backstories for characters – I’ll start laying out cards that represent things like “relationship with mother, early childhood defining moment, hopes and dreams, inner self/idealized self,” things like that. For example, one character I had drew the Seven of Swords for her defining childhood moment, with the Nine of Swords for her relationship with her father. I thought of a moment where she would steal her father’s sword at night, use it to train and teach herself sword-fighting, an endeavor which filled her father with a paralyzing fear, knowing he couldn’t keep her from her destiny.

This can become increasingly beneficial the more you build/identify your characters with various cards. For me, I typically try to think of signifiers for my characters, as well as major arcana that they are currently being influenced by. This way, if one of their cards comes up in another character’s reading, it builds a relationship between them, allowing for unexpected connections that lead to rich, lived in stories (or, at least that’s the goal).

Even if a fair amount of the thoughtwork I put in doesn’t end up directly on the page, it’s still immensely rewarding. I’m a huge advocate for subtext, and it’s an important part of my process to include histories and backstories that inform my characters, even if readers aren’t made consciously aware of those connections.

On a more basic level, a quick three card reading can often help me set up a scene, providing an initial setting and a direction to explore (similarly to how I started out this entry, basically being slapped with pentacles, reminding me that I need to get-a-typing, even if its just to warm up). Working with the interconnectedness of your story, this can point you to dramatic entrances, or illuminate alternate paths to what you’re already considering.

Regardless of how you use Tarot, the important part is that it gets you thinking creatively.

Finally, one of the things I love the most about using Tarot when writing is when the injection of randomness pays off with some spooky coincidence. For example, I was writing a sequence of overlapping concurrent competitions, and decided one of the threads would be people playing cards. When deciding which cards should be featured in the panels, I turned to my Tarot deck, and laid out 3 cards at a time, using only the minor arcana to represent a typical 52 card deck, but paying attention to major arcana for influences on the other threads of the sequence.

It was an overelaborate fight scene, so for the final use of the cards, laying out three 5’s (representing conflict and struggle,) I felt quite excited at the eventual outcome, having trusted my deck, and it delivered additional meaning through chance. (Which is Tarot in a nutshell, really.) 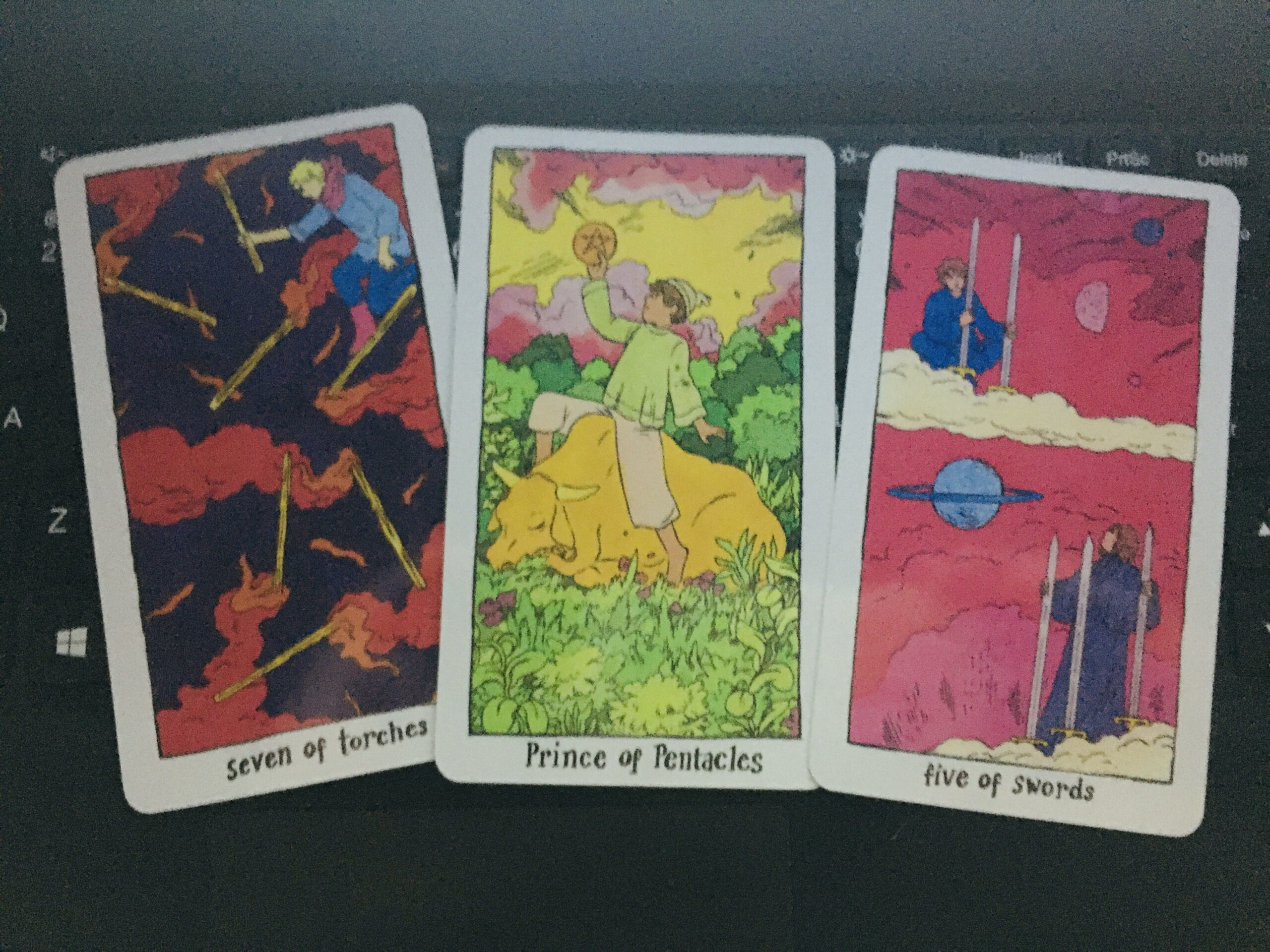 And if you want to talk Tarot, comics, or writing, come find me on Twitter @PhilUebbing – I might even give you a reading if you ask nicely ?