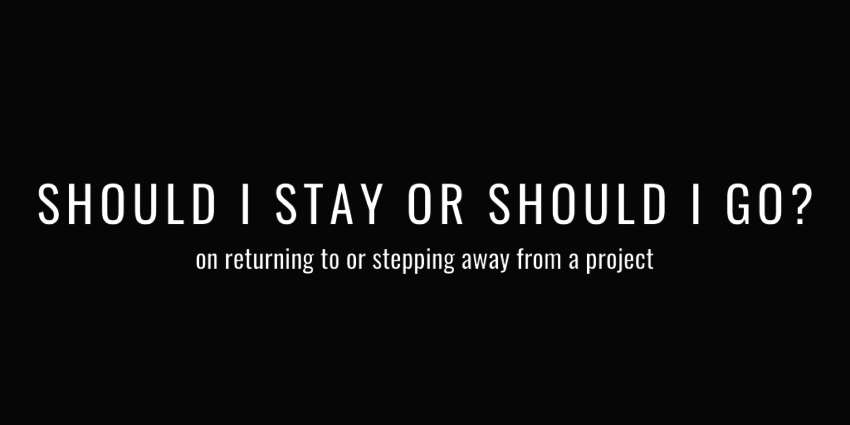 On returning to or stepping away from a project.

Hello, and welcome to Tales from Outside Comics! The motivational advice
column written by a comic book hopeful just like you! Today, I’m going to be writing a bit
about, well, not writing, weirdly enough. I’ll be exploring the idea of “The Shelf” (or
drawer, or box, doesn’t matter, it’s just the place you put things when you’re not working
on them) and how to interact with it consciously.

So, it’s been a hell of a year, but I’m glad to be back. I’ve been taking time to
focus on my personal life while creative endeavours fell to the backburner. 2019 was a
great year for me – I started up a new job at my local public library, met the love of my
life, moved out of my parents’ house for (hopefully) the last time, spent a weekend in the
hospital enduring a medical mystery, adopted two adorable fur babies, started reading
tarot, survived my first holiday season with future in-laws, and towards the end of the
year, started working on a novel. I kicked off 2020 by making plans to buy a ring; things
were going wonderfully.

Now, this wasn’t the first break I’ve taken from writing and creativity. Last time,
after a falling out with a writing partner, I didn’t write anything for four years. Instead, I
just sunk into depression until my life caved in around me. Obviously, this is the kind of
shelving we want to avoid. So, what was the difference between these two periods of
not writing?

Well, the key to both instances was putting something on The Shelf, a fancy term
for not working on something, giving it time to breathe. (An important note here,
shelving is very different from trashing. When you put something on the shelf, it’s with
the intention of coming back to it.) Back when I didn’t write for four years, I had put
myself on the shelf – it never felt like giving up on writing, not completely, but that’s what
it was. I didn’t believe in myself, and I wrapped myself in fantasies to try and forget my
unfavourable reality.

This past year, I just put my creativity on hold while I focused on other things. I
was still growing, changing, maturing, even though I wasn’t generating work. But that’s
OK, because creativity is an indirect process sometimes – we need to give ourselves
time to experience and enjoy life, to recharge our tanks and find inspiration. Back then, I
told myself I didn’t know what to write, while now, I feel like a font of ideas. I’m feeling
the positive effects of building up a support structure (something I hardly did alone, and
have to give infinite gratitude towards my better half for facilitating) during my time away
from the keyboard.

Because through it all, I had left a little seedling of an idea on my shelf – a spark
of inspiration I can track to the early days of 2019 that didn’t take form until the end of the year. And in that span, the idea grew, mutated into something wildly different. What
had started out as a YA fantasy inspired by my time in high school suddenly wanted to
be something greater and stranger.

This is the main piece of advice I’d give when taking something off the shelf –
listen to it, and don’t be afraid to let it change. That’s what the shelf is for, injecting time
into a project while you can gain some perspective. As creatives, all we can really do is
express the aspect of where we are at our given time. The most dramatic example I can
give is that I’ll never be able to write the way I did before 2020. This year has been too
much, changed me too much, and the world is not the same place it once was, and I
accept that.

Oddly enough, listening to my project was the same way I ended up putting it
back on the shelf. Remember that novel I mentioned starting? Well, the more I worked
on it, the more I couldn’t help but imagine it as a graphic novel. I had started it with the
intention/hopes of using it as a springboard to transfer into a comics writing career. But
something about that end of the world air tainted that prospect. If everything was going
up in flames, I figured I should say damn it all, and just pursue my dreams directly. And
so I shelved my massive project to refocus on smaller scripts (every single piece of
advice I’ve heard about getting into comics says to start small, so that’s what I’ve been
doing.)

Walking away from a project can be hard, but the important thing is to not see it
as failure, but growth. Even when I wasn’t writing for years, I was still growing (slowly,
but it was happening) and becoming the person I am now. In those years, I couldn’t
have imagined my current life, and yet, here I am. In that same way, I couldn’t see the
end of my project, a completed, pictureless tome. And yet, I know it will take shape one
day, and become something more beautiful that I could have imagined.